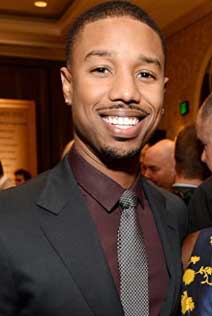 Michael B. Jordan is on board to produce a movie adaptation of the DC superhero "Static Shock" for Warner Bros., which could spawn a multi-platform franchise.

The 'Black Panther' star will reportedly team up with Reginald Hudlin to bring Static Shock to the big screen.

Jordan confirmed his role in the Static Shock movie on Twitter on Friday. The actor posted a photo of the first Static comic book issue and added in some cheeky emojis for flavor. In addition to Jordan's very relaxed tweet, he also shared an official statement with The Hollywood Reporter about his involvement in the movie, commenting, "I'm proud to be a part of building a new universe centered around black superheroes; our community deserves that. Outlier Society is committed to bringing to life diverse comic book content across all platforms and we are excited to partner with Reggie and Warner Bros on this initial step."

The character of Static, a.k.a. Virgil Hawkins, first appeared in 1993's Static Vol. 1 comic for Milestone Comics. Static's superpowers come as a result of interaction with a radioactive substance, giving the hero the ability to control electromagnetic fields. Static Shock came about as a younger, more kid-friendly version of the Static character who appeared in the WB animated series of the same name.