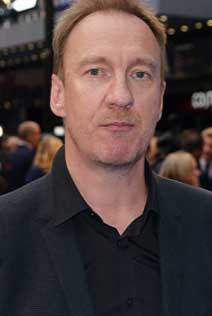 David Thewlis confirms he is playing a Na'vi in Avatar 2. Thewlis is one of the many newcomers joining the Avatar franchise for its sequels. Kate Winslet, Michelle Yeoh, Jemaine Clement, Edie Falco, Cliff Curtis, and Vin Diesel are among those who are saddling up for Avatar 2, which is currently slated to arrive in December 2021.

Thewlis will be playing a Na'vi in the movie and he spoke to Total Film about his role: "I've got no idea what my scenes will be like because there are about 16 guys in the room with video cameras but they're just shooting reference shots for Jim Cameron to look at later. What those guys are shooting will never be on the screen, what's being shot is obviously on these sensors. There are about 200 around the room, doing their thing."

"I am a Na'vi, I'm a blue thing in it - which I didn't quite understand when I went to meet Cameron. I was quite surprised when I got offered that. I'm fascinated to see how I'm going to look, because they sort of make them look a bit like oneself. It's fantastic!"

"For the first time, I felt like a total newcomer, like it was my first job. I was on set having been working for 35 years on film sets and I was like, 'So what do we do? What's that doing here? Why is he doing that? Do we do it now?' I felt very naïve. And of course, I was, because none of the rules applied from everything I've learned."

Winslet and Curtis are also some of the newcomers playing Na'vi, and fans got a glimpse of them behind the scenes alongside Worthington and Saldana in a picture shared on social media.

Film Stories : Harry Potter and the Order of the Phoenix (2007)