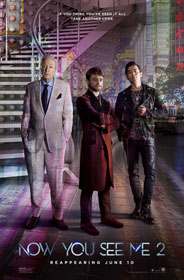 Lionsgate has hired Eric Warren Singer, an Oscar nominee for his work on American Hustle, to write the heist thriller Now You See Me 3, based on a fresh take by Singer.

"Now You See Me 3" is based on Singer's new idea which is intended to capture the spirit of the original two films, but with new characters - which have not yet been cast. However, he'll create opportunities for the original cast to reprise their roles.

Jonathan Bayme and his company Theory 11 will serve as a magic consultant to the filmmakers.

Bobby Cohen and Alex Kurtzman of Secret Hideout are teaming up again to produce. Meredith Wieck and Aaron Edmonds will oversee the project for Lionsgate.

Jesse Eisenberg, Woody Harrelson, Isla Fisher, Dave Franco and Morgan Freeman starred in the previous two films, which opened in 2013 and 2016 and together grossed $687 million worldwide.