Dwayne Johnson confirms that Hobbs & Shaw 2 is in development. 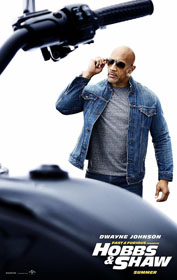 Dwayne Johnson has taken to Instagram for a Q&A, where he spoke about adding another film to his already busy schedule, the actor talking about plans to continue in the role of Luke Hobbs in a sequel to his 2019 outing Fast & Furious Presents: Hobbs & Shaw.

"We are developing now the next film, the next Hobbs & Shaw movie, and I’m pretty excited about itJust gotta figure out the creative right now and the direction we’re going to go."

While there’s no confirmation on the return of co-stars Jason Statham and Vanessa Kirby or even director David Leitch and screenwriter Chris Morgan, it seems likely as the film was a moderate box office success with fairly positive reviews.

The first film, a spin-off from the very, very popular Fast & Furious series, of which there are NINE movies in the series so far, the ninth waiting in the wings for a debut next year (delayed from a summer 2020 release). Hobbs & Shaw revolves around the characters of Luke Hobbs (Dwayne Johnson) and Deckard Shaw (Jason Statham) who are put together to bring down an enhanced soldier named Brixton Lorr (Idris Elba).

The first movie was a massive success for Universal Pictures with the film taking in a massive $760 million all over the world when it was released in cinemas last year.