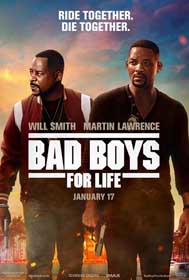 With the nation's movie theaters dark due to the coronavirus outbreak, Sony Pictures has given its hit action comedy "Bad Boys for Life" an early video on demand release on March 31 , and then on 4K Ultra HD, Blu-ray & DVD April 21.

Sony is likely hoping to get in on the early digital release trend that several other films have been adopting in the wake of the coronavirus, including The Hunt, The Invisible Man, Birds of Prey, The Way Back, and more.

The Will Smith and Martin Lawrence re-team from Sony is currently the highest grossing release at the domestic box office year to date with $204.4M, and $419M world wide.

On its disc formats, Bad Boys for Life boasts over 50 minutes of bonus features including an alternative ending, extended and additional scenes, bloopers, Easter eggs and more.

The threequel was in development for quite some time, the previous installment being 17 years ago. Bad Boys for Life was directed by Belgian filmmakers Adil and Billall.