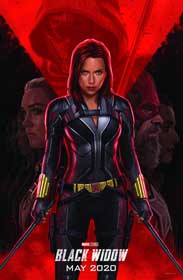 Disney's "Black Widow" is the latest tentpole to shift its release date because of the coronavirus pandemic.

The Marvel superhero adventure, starring Scarlett Johansson, was set to hit theaters May 1. The studio also pulled "The Personal History of David Copperfield", from its Searchlight banner, and "The Woman in the Window", a 20th Century title, which were supposed to debut May 8 and April 15, respectively. It's unclear when any of the films will be released.

Even before the official announcement, Marvel and Disney had already staked out a number of future release dates for new McU movies, including seven locked-in dates that run from 2020 until 2022. Marvel head Kevin Feige said that the studio actually has enough storylines planned out to take the series though 2028 with a total of 20 films. No, not much wiggle room at all.