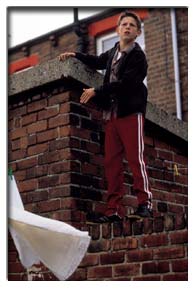 BILLY ELLIOT star JAMIE BELL has been tormented by homophobic thugs after kissing another boy in the smash movie.

The 14-year-old wonderchild lives in constant fear of being beaten up since returning to school. "Some of the younger guys are a bit jealous, threatening to beat me up because I kissed a lad in Billy Elliot," he admits.

Fortunately, Bell - in true moviestar style - has also attracted himself some bodyguards. He continues, "During one break-time I was mobbed. These kids started running at me, but some of the older lads have been looking after me. "I was standing behind this big guy who stared them down, saying: 'Yeah, what are you looking at?'"

Bell also finds consolation in another typical celebrity accessory - adoring females. "As well as the problems there's a lot of interest from the girls, which I'm having fun handling - on my own." The talented teen plays a wannabe ballet dancer in the film, which is set in Northern England during the 1984-85 miners' strike.